Waltham Public Library traces its roots to 1865 when the town created what was called the Free Town Library. It was formed from the merger of three older libraries: the Waltham Social Club, the Rumford Institute, and the Agricultural Library Association. The new library was located on the top floor of a bank building. In 1880, the library moved to the corner of Charles and Moody Streets.

It took a generous benefactor, Francis Buttrick, to give the town the building the library now occupies. In 1838, Buttrick was a Waltham based carpenter. He eventually started his own business and purchased a lumberyard in 1857. He made his fortune in real estate and was able to give the money for a new library building. 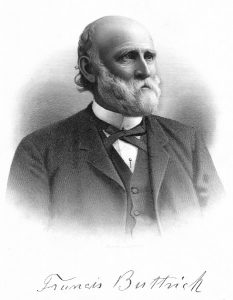 In 1913, the planning committee decided that the new library’s site would be where the old Central House stood on Main Street. Central House’s history went back to 1679 when it was a tavern owned by David Smith. Loring and Leland, architects in Boston, were chosen in 1914 for the design of the new building, and the groundbreaking was held on October 23 of that year. The formal dedication of the new library was held on December 11, 1915 with a gala event, and the library reopened to welcome patrons on the thirteenth.

There have been many changes since that time. Several branches have come and gone. A community room called the Sears Art Gallery was added in 1933, partly to house paintings done by Charles Woodbury and bequeathed to the library. It was named for Sarah Lyman Sears, a granddaughter of Theodore Lyman, builder of the “Vale” estate, and sister of Lydia Paine, whose family built “Stonehurst.” The most recent renovations were in 1994, doubling the library’s space.

If you would like to learn more about the history of the Library or Waltham, please visit our Local History page.